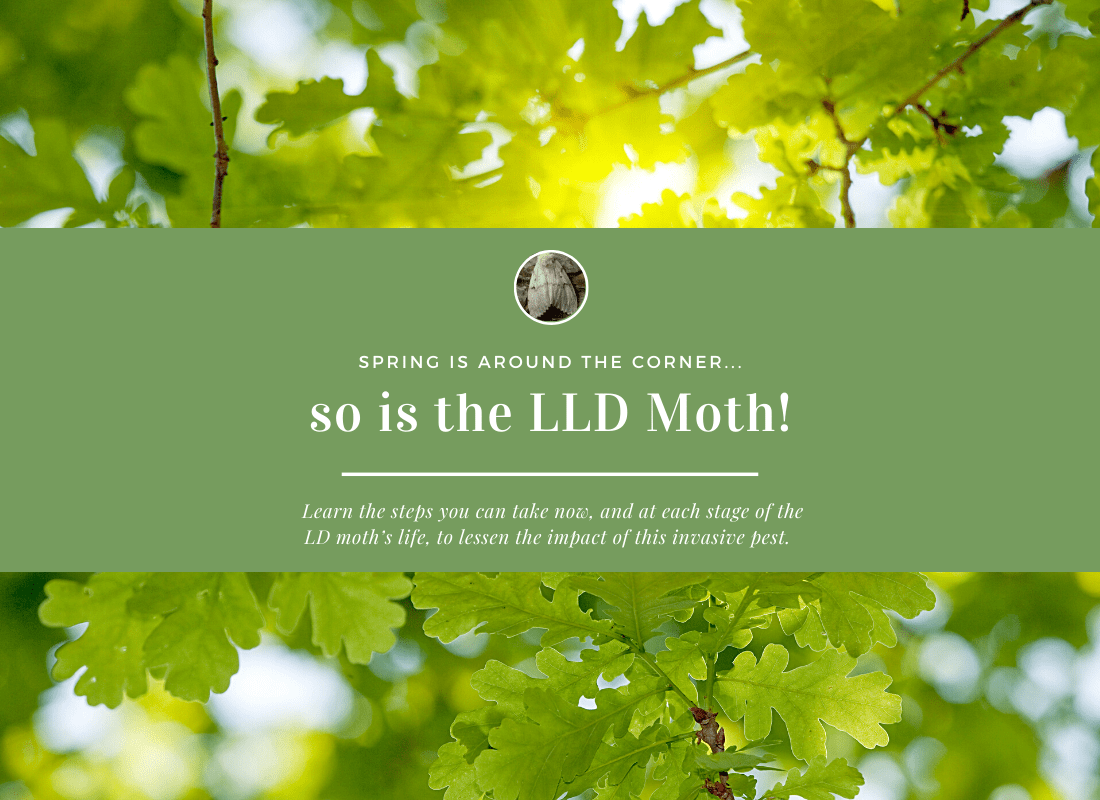 Spring is just around the corner and it’s time to start thinking about that prolific pest, the LLD Moth aka the Gypsy moth, Lymantria dispar, or Spongy moth. Remember last spring when those tiny black caterpillars were everywhere? They seemed to appear out of nowhere, were on everything (people included), and they packed a big bite!  We soon found out that was just the beginning of a terrible ordeal with this pest. There is hope though! There are steps and treatments we can take now, and at each stage of the LLD moth’s life, to lessen the impact of this pest.  Below we answer your questions on how to protect your trees and shrubs, and aid in getting rid of the invasive pest the LLD Moth.

About the LLD Moth

The LLD moth is an invasive species here in North America. It is native to Europe and has no natural predators here as our native moth predators don’t seem to like how they taste. Since the moth feeds on a wide variety of trees from oak, birch, aspen, sugar maple, beech, eastern white pine, balsam fir, colorado blue spruce, all manner of fruit trees, and even ornamental shrubs, they have caused massive amounts of damage across Ontario and Quebec. In Ontario last year they caused the defoliation of almost 1.8 million hectares!

Although LLD moth populations usually peak every 7-10 years, this year is predicted to be another peak year. Unfortunately, the damage they may cause could be even worse this year for two reasons: a tree's ability to recover from attack lessens with each consecutive year, and defoliation makes trees more susceptible to secondary pests, drought, and poor growing conditions.

Remove egg masses and destroy. Scrape off egg sacs and dispose in soapy water for at least 2 days. Horticultural oil spray will also effectively smother egg masses, which can be sprayed and left in place if it is too high to reach to remove.

Although LLD moth adults die off in the fall, the egg masses can survive our cold Canadian winters just fine. Egg masses are often laid on the bark of trees but can be found in any sheltered spot like the eaves or side of a shed, the underside of a fence rail and even on garden ornaments. They look like fuzzy, oblong, light brown splotches that are slightly thick and they can be easy to miss so you have to look carefully.

Apply the biological pesticide B.T.K. You can pick some up at Gemmell’s in 100ml and 500ml concentrate bottles. Simply mix with water as directed and spray the tree from top to bottom as soon as you spot the larvae.

In spring, eggs hatch and larvae climb the trees to feed on the new foliage. Initially, feeding occurs during the day, but as the caterpillars mature feeding occurs mainly at night. The caterpillars first look like tiny black lines that are only a few millimetres long and seem to be everywhere. Many people have reported feeling a bite or small sting from them.

Apply burlap bands to trees & discard larvae. Gemmell’s has brought in a special product from Tanglefoot for this purpose, and it really works. The Tanglefoot Tree Care Kit was designed to help control LLD Moth larvae as well as canker worms, vine weevils, ants, and other crawling insects. It is a ready-to-use kit that contains a 50’ roll of material to wrap around your trees and a special natural sticky paste and applicator that goes on top. Easy to use and lasts all season long. Alternatively you can use plain burlap and vaseline or even duct tape wrapped sticky side out around your tree for a temporary solution.

As the larvae get more mature, they remain dark and hairy and develop a double row of five pairs of blue spots and a double row of six pairs of red spots down their back. They grow to be around 50 mm (almost 2”) long.

From Mid-July to August

It is recommended to use commercial LLD moth traps. They are baited with a pheromone from the female moth to lure and trap the males and so help to disrupt the life cycle. Of course, if you see a moth resting on a surface within reach you easily destroy them as they are slow and reluctant to move, especially while laying eggs.

Feeding is finished from June to mid-July and the caterpillars will pupate. These are easy to remove by simply plucking off the tree and disposing in soapy water.

After pupation the adult moths will emerge. Male moths are light brown in colour and slender-bodied, while females are white and heavy-bodied. The adult moth does not feed at this stage, it is entirely focused on finding a mate and continuing the cycle.

So even though it seems difficult to get a handle on such a prolific and invasive pest, the good news is that we at Gemmell’s Garden Centre can provide you with the most up to date, safe, and effective tools and resources to help fight this hungry little caterpillar.

Latest from Our Blog

We want you to be successful with your garden. To achieve the best results, we recommend following these planting instructions with easy steps for success.

Join our community of more than 10,000 plant loving friends.

Subscribe to our newsletter where we will keep you up to date with current garden trends, seasonal advice, upcoming workshops, and promotions!